Ireland has some of the most beautiful, challenging rivers when the waters are up, some are off the scale at times like the Dargle in Co. Wicklow or

Ireland has some of the most beautiful, challenging rivers when the waters are up, some are off the scale at times like the Dargle in Co. Wicklow or the Upper Flesk in Co. Kerry, not for the faint hearted!  But there are plenty of easy paddles anywhere around the country at any time, but be sure to get local knowledge first, play safe and enjoy!!!

Kayaking is the use of a kayak for moving across water. Kayaking and canoeing are also known as paddling. Kayaking is generally differentiated from canoeing by the sitting position of the paddler and the number of blades on the paddle. A kayak is defined by as a boat where the paddler faces forward, legs in front, using a double bladed paddle. Almost all kayaks have closed decks, although there are many sit-on-top kayaks which are growing in popularity, as well as inflatable kayaks which come without decks but which have air chambers surrounding the boat. A canoe is defined as a boat where the paddler faces forward and sits or kneels in the boat, using a single bladed paddle. Canoes can be closed deck or open deck.

White water kayaking involves taking a kayak down rapids. Sea Kayaking, involves taking kayaks out on to the ocean or other open water e.g., a lake. Sea kayaking can involve short paddles with a return to the starting point or "put-in" or expeditions covering many miles and days. Kayaking of all kinds has continued to increase in general popularity through the 1990s and early 21st century.

Kayaks are classified by their intended use. There are seven primary classifications: polo, slalom, white water, surf, touring/expedition, light touring/day tripping, sprint/racing and general recreation. From these primary classifications stem many sub-classes. For example, a fishing kayak is simply a general recreation kayak outfitted with features and accessories that make it an easier kayak from which to fish. A creek kayak is a certain type of white water kayak, designed to handle narrow gully type rivers and falls. Also within these classifications are many levels of performance which further separate the individual models. In other words, not all touring kayaks handle the same.

Kayaks and canoes are also classified by their design and the materials from which they are made. Kayaks can have hard or soft chines which require different types of handling. Each design has its specific advantage, including performance, manoeuvrability, stability, and paddling style. Kayaks can be made of metal, fibreglass, wood, plastic, fabrics, and inflatable fabrics such as PVC or rubber. Each material also has its specific advantage, including strength, durability, portability, flexibility, resistance to UV, and storage requirements. For example, Wooden kayaks can be created from kits or built by hand, but they are heavy to transport. Inflatable kayaks, made from lightweight fabric, can be dried, deflated, and stored in a closet.

There are several major configurations of kayaks. "Sit on tops", as the name suggests, involve sitting on top of the kayak in an open area. "Cockpit style" involves sitting with the legs and hips inside the kayak hull with a "spray deck" that creates a water resistant seal around the waist. "Inflatables" are a hybrid of the two previous configurations, these boats have an open deck, but the paddler sits below the level of the deck. "Tandems" are configured for multiple paddlers, in contrast to the single person designs featured by most kayaks. Tandems can be used by two or even three paddlers. How a kayak is configured has nothing to do with its classification. All configurations are represented in each of the five primary classifications. 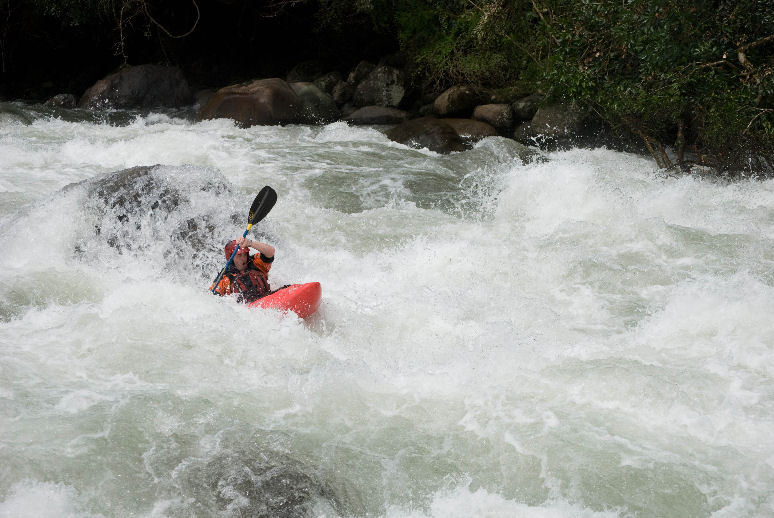